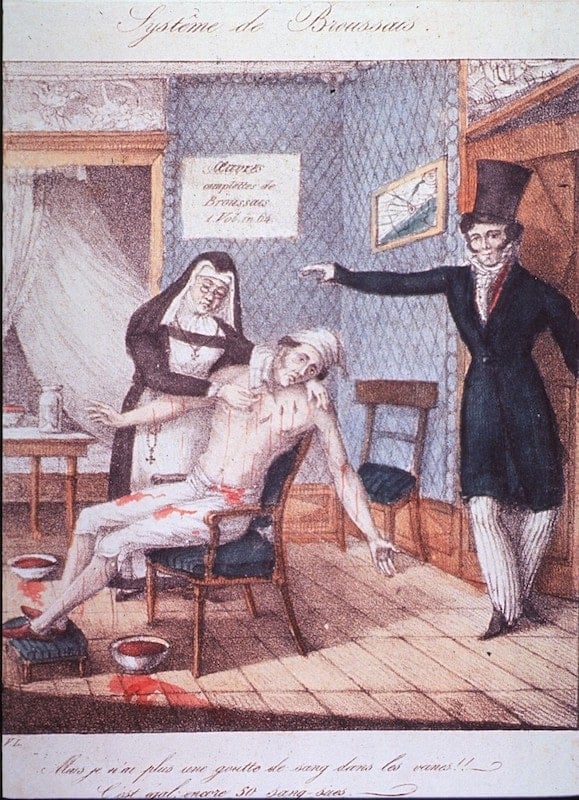 Let’s take a moment of immersion and imagine ourselves among the knights, kings, and castles that graced the time in history known as the Middle (or Medieval) Ages. The medieval period, from the 5th century to the 15th century, was known for its ferocious Crusaders, gruesome torture, deadly revolutions, and Gothic art. However, what the people of this period were definitely not famous for were their advancements in medicine, especially when compared to their predecessors, the Greeks and Romans. But what about this era in time made the practice of medicine nearly stand still, if not digress?

Well, it has a lot to do with the beliefs of the people who lived during this time. The medieval ages were a period in history controlled heavily by the Roman Catholic Church. As a result, religion became intertwined into every aspect of their lives, including medicine. Through the lens of religion, illnesses were thought of as God’s punishment for those who had sinned. Unsurprisingly, this meant their medical procedures weren’t the most grounded. That said, they sure were interesting.

The practice of draining blood, or bloodletting, actually dates back to before the Middle Ages, to the time of ancient Greece.

To understand why this practice was so common, you must first understand what ancient physicians believed about the body. A theory proposed in the time of ancient Greece by Hippocrates, a famous physician, centered around the idea that our body consisted of four substances called “humors.” Each substance was related to a particular personality type and a specific organ in the body. People believed if you had an imbalance in these humors, it could make you sick. Several centuries after Hippocrates and only two centuries before the medieval period began, a Greek physician named Galen of Pergamum theorized that draining a bit of the patient’s blood would balance the four humors. Thus began the popularity of bloodletting during the medieval period.

Doctors recommended bloodletting for many conditions, like smallpox, fainting spells, gout, and even poor temperament. The practice was performed with specific instruments that cut into the blood vessels in your neck and forearm or leeches, the surprisingly less gruesome alternative.

As strange as bloodletting may seem, people sang its praises until the late 1800s. The practice is still used today for special cases, like haemochromatosis, polycythemia, and more. Although, the reasons for prescribing this treatment are quite different. 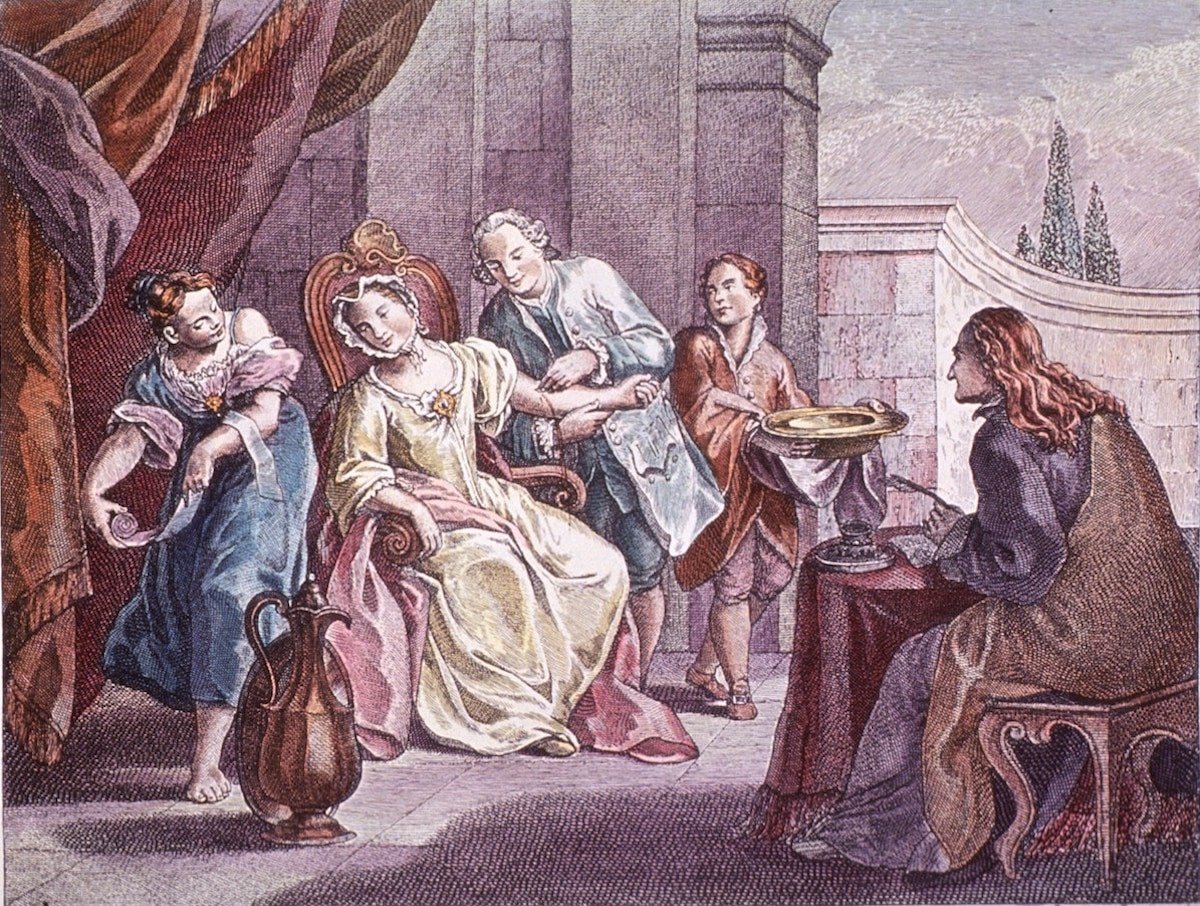 As you may have noticed, medieval society was not one of acceptance. People were intolerant, supersititous, and feared human individuality. So, it will come as a surprise that something as crude as cannibalism was widely accepted and revered as a medical treatment. That’s right, back in medieval times, people believed that human flesh, blood, and bones could cure you. Doctors would prescribe human blood for epilepsy, migraines, eye problems, ulcers, and so on. For gout and epilepsy, doctors would give their patients oil made from boiled human bones.1

For the rich, Egyptian mummies were a large source of medicinal, magical human flesh. However, some people preferred the cheaper option, which consisted of attending an execution and filling a jug, towel, or cup with fresh blood before the victim was even dead.1

Many believed that consuming human parts could leave you with a part of the dead human’s soul, boosting your vitality and serving as a gruesome fountain of youth.1

This practice was so common in medieval times that most kings and queens consumed human-made elixirs. Charles II, Queen Mary, Francis I, and many more monarchs were said to often rely on cannibalistic tendencies to cure their illnesses.1

If you’re one that shies away from gory movies and gruesome history, this medical practice will probably seem extra horrific. Trepanation, a practice still used today, involves drilling holes into a patient’s skull. Today, this practice is used for several procedures, but back then, it could be used to treat something as basic as a headache. It was a common procedure for epilepsy, mental illness, head wounds, and more.

Because people in the Middle Ages centered so much of their life around religion, people with mental illness were thought to be possessed by the devil or other evil spirits. Therefore, physicians often performed trepanation to release evil spirits from the person’s head.

As alarming as that all sounds, there’s one truly gruesome part to remember. People who underwent trepanation in the Middle Ages were awake the entire time. Trepanation was often done in someone’s home with no anesthesia and no pain relief. 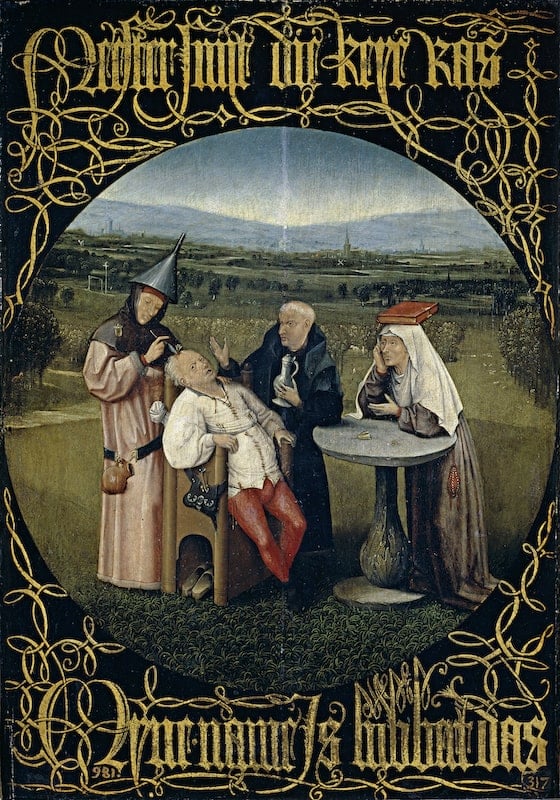 The Extraction of the Stone of Madness, by Hieronymus Bosch // Wikipedia.org

If this next idea doesn’t give you perfect insight into women’s medicine in the medieval period, then I simply don’t know what will. This idea is as old as it is whacky with roots tracing back to ancient Egypt.2

Doctors in the Middle Ages had very little interest in and knowledge of a woman’s body, especially their reproductive structures. That said, one thing they did believe was that a woman’s uterus had a life of its own. They also believed that a woman’s uterus strongly desired to carry a fetus. It was said that if a woman wasn’t routinely pregnant, the uterus would leave its home in the pelvis and start wandering about the body in search of something to fill the lonely womb.2

Now, to physicians, a wandering womb was seen as very serious. This womb could cause severe illness and “hysteria” by running into vital organs and smashing them. This included the lungs, which could ultimately cause suffocation.2

But never fear; medieval doctors had plenty of ways to remedy this issue. If physicians believed the uterus had made its way toward the top of the poor woman’s body, he placed unpleasant-smelling fumes under her nose and sweet-smelling fumes between her legs. The hope was that this would cause the uterus to retreat back to its rightful place in the body.2

Similar to how King Midas’s touch turned things to gold, kings of medieval times were believed to heal the sick with only the touch of their hand. Dubbed “the Royal Touch,” a monarch’s touch was often used as a treatment for scrofula. Scrofula, or cervical tuberculous lymphadenitis, is a type of tuberculosis that affects areas outside the lungs, usually causing inflamed lymph nodes in the neck.3

The Royal Touch was such a popular treatment for scrofula the disease became known as “the King’s Evil.” People would stand in line for hours and wait for the king’s magical healing touch. It’s believed that King Charles II touched 100,000 of his subjects after performing several ceremonies a year during the entirety of his reign.4

By the 15th century, monarchs began distributing golden coins that they had blessed instead. These gold coins, called “touchpieces,” were also believed to have healing properties and acted as a good stand-in for monarchs not particularly fond of touching oozing boils all day.4 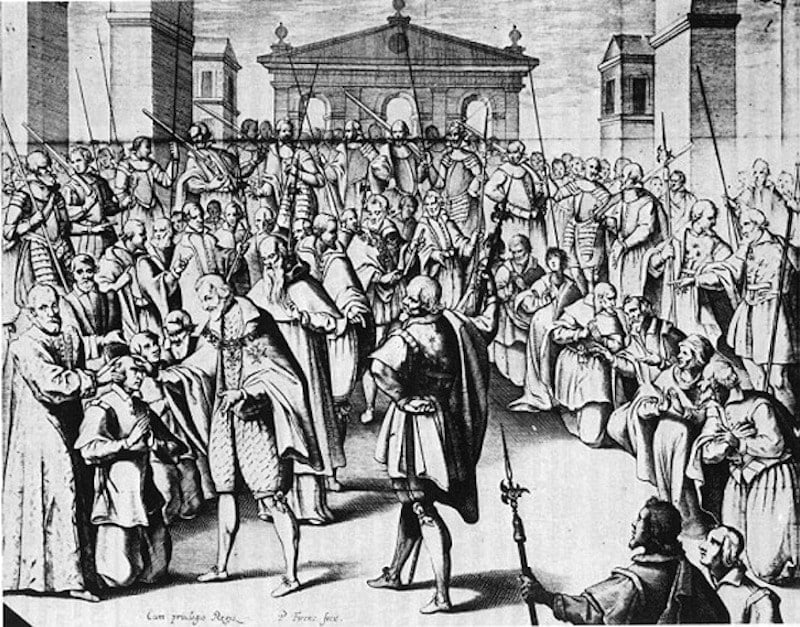 6. Treatments for the Black Death

Easily one of the most famous events in medieval history was the spread of the Black Death. What started with the discovery of a ship from the Black Sea filled with dead sailors covered in oozing black boils ended with the death of nearly ⅓ of Europe’s population, 20 million deaths in just five years. The Black Plague, also known as the “Black Death” or “Bubonic Plague,” is a bacterial caused infection that was spread by fleas that then infected rats. Rats carried the disease all over Europe, hitching rides on ships and sailing to different countries.

Born from the hysteria of this deadly plague were several strange ideas on how to cure this devastating disease. To some, stale air seemed to be a reason for this disease, and to cure those with it, they needed to break up the air with loud noises like bells, guns, and birds. Others burned aromatic herbs, relied on bloodletting, and bathed in rosewater.

Most people believed that the Black Death was a punishment from God sent to destroy all sinners. This, unfortunately, led to some even worse ideas. While some prayed for salvation, others took it a step further, conducting massacres against groups who did not follow Christian law.

Flagellation became another way people believed they could end the plague. Flagellants were a group who frequently whipped themselves with leather straps studded in metal in the center of towns for all to see. The hope was that inflicting pain upon themselves could help them repent for their sins and end God’s harsh punishment. Sadly, we later discovered that antibiotics seemed much more effective against the disease and switched to that treatment instead. 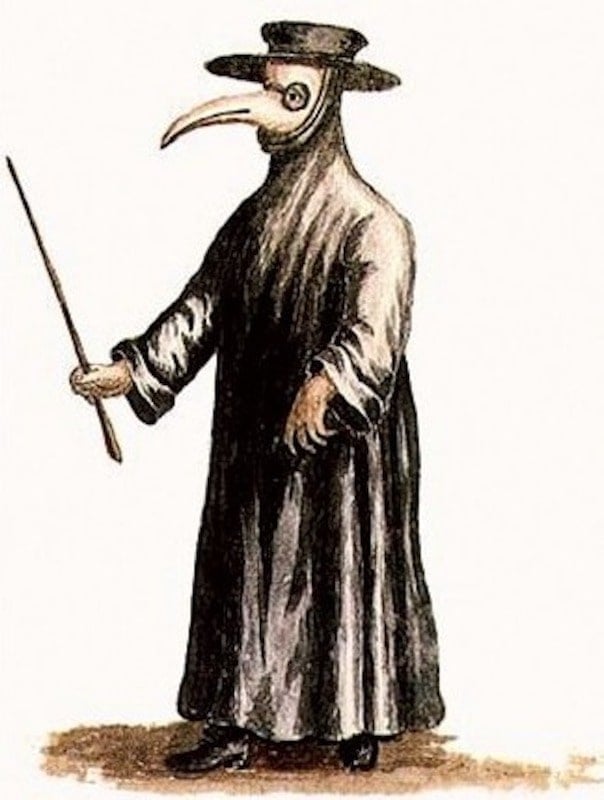 For a good reason, the Middle Ages are known as the Dark Age of Medicine. The field of medicine no longer flourished in discovery as it had in Greek and Roman times. In fact, medieval physicians were so pleased with the ancient beliefs and writings of physicians like Hippocrates that they claimed there was nothing left to learn in the realm of medicine.5

Additionally, religion’s stronghold on the Middle Ages also halted the field of medicine. For example, not much was known about the human body’s anatomy. Human bodies were considered sacred to the Roman Catholic Church, so dissection was not permitted.5

Eventually, as the story goes, the medieval ages ended, and thus the age of the Renaissance began. Unlike its predecessor, the Renaissance advanced in medicine, questioning these barbaric practices medieval physicians had so faithfully sworn by. Scientists discovered human circulation, advanced their knowledge of human anatomy, developed new surgical techniques and traded superstition for science. As humanity advanced, the dark age of medicine was forever left behind and we can now reflect with gratitude upon the fact that we never had to experience a headache in the 1300s.