First off, this guide is not just about lifespan. These tips can improve your energy, happiness, productivity, and much more than just how long you live.

This cheat sheet is designed to be short and jam-packed with science-based tips to improve your longevity. In contrast to fluffier online resources, we will focus exclusively on results of modern science. For each tip in our guide, we identify a reasonable longevity improvement that an average person might be able to attain, ranging from 7% to 66%.

Disclaimer: The studies below are mostly correlations, not guaranteed causations, and are based on averages of many people. This means that your personal health may react differently than in the studies. Before taking action, you should talk to your doctor about your specific situation.

#1: Do not smoke cigarettes

The most boring and yet most effective recommendation on our list shouldn't surprise anyone. Don't light toxic stuff on fire and then inhale it. Never-smokers vs. lifelong smokers have a whopping 66% reduction in mortality, and quitting after a long time of smoking can also retain much of this benefit.

There's a reason fitness trackers target 10,000 steps per day: it's the magic number that gets you most of the possible improvement. Increasing step count from 4,000 to 8,000 per day was associated with a staggering 51% reduction in death from all causes (all-cause mortality). Additionally, the intensity of the steps, like running vs. walking, didn't matter at all! So 25 minutes on the elliptical might save you time in obtaining your step goal, but each step will benefit your longevity the same as a normal walk.

This was higher up the list than we expected, but it turns out that totally hiding from the sun can really hurt you. A study of 29,518 Swedish women found a 2X decrease in mortality associated with the highest amount of sun exposure. Note however that we only gave this study a scientific rigor score of 1/3 because it was only women and took place in a northern (less sunny) country. Many other studies have found that adequate sunlight is important for longevity though, often related to Vitamin D and melatonin.

It's obvious, but we'll state it anyway: too much sun will kill you. Pretty quickly, in fact. So don't take this as advice to sit in the sun all day or to get sunburnt.

Read more about how the sun can affect our health.

Our study showcasing sauna benefits is from Finland, as many sauna aficionados might have guessed. The study only includes men and they're all from Finland, but it's the best study we found and it shows a substantial 40% reduction in all-cause mortality for those who used a sauna 4-7 times per week compared with once per week. Normally we'd compare with zero saunas per week, but apparently that is unheard of in the sauna capital of the world! Keep in mind this is for dry saunas at around 175˚F, so does not necessarily apply to cooler saunas, infrared saunas, or steam rooms. Although, we did find a study linking infrared sauna with coronary improvements.

#5: Brush and floss your teeth nightly

In addition to not aggravating the people within smelling distance, brushing and flossing each independently help you live longer according to our chosen study on dental behaviors. Brushing and flossing every day compared to not every day was associated with a mighty 37% reduction in death during the study period. Yep, it wasn't just something your parents bugged you about, it might actually kill you! A curious discovery in the article was that nightly brushing was most important, and was even better than morning and daytime combined. Flossing every day was best, but don't worry if you're lazy sometimes, there was still noticeable benefit in flossing "sometimes", just not as much.

Another commonly mentioned factor of faster aging, reduction of perceived stress landed on our list with thorough scientific evidence. There is an entire industry around stress reduction, but if you're looking to improve you should first consider all the other health improvements on this list since many can reduce stress. Then, perhaps consider meditation or massage, which both have scientific evidence of stress reduction.

#7: If you drink alcohol, stay below 7 standard drinks per week 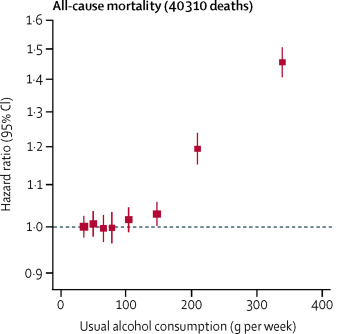 A small amount of alcohol appears to give you slight protection from a few causes of death, notably myocardial infarction, but it's still detrimental to overall longevity. For amounts below 100 grams (~7 drinks) per week, this study of 599,912 people found negligible effects on mortality. But, as you can see in the chart, those negative effects increased steeply above 7 drinks per week. Cutting down from 3 drinks per day to 1 drink could reduce your risk of death by 31%!

Keep in mind that if you don't currently drink, we wouldn't recommend you start, since alcohol is known to be addictive and moderating your consumption might be difficult. 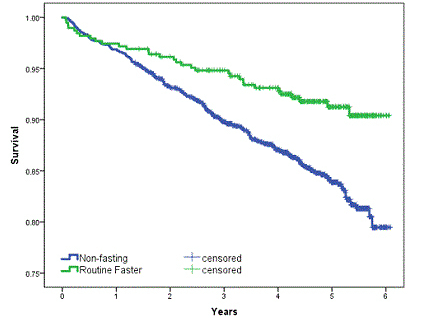 Caloric restriction is one of the most effective and persistent methods of extending life across every species of life ever studied. Humans, however, have not been equally proven to live longer simply by reducing calories. There are some studies showing probable positive effects, such as the people who eat less in the Japanese islands of Okinawa, and across studies of fasting, which is a little different from calorie restriction. The best study we found wasn't as thorough as we'd hoped because it studied only 2,714 people and they were all recovering from a surgical procedure. But, it did show a very substantial reduction in mortality for those who routinely fasted for 5+ years compared with those who didn't fast.

#9: Don't consume too much sugar

This study found that consuming only 10% of your daily calories as sugars compared with 20% or more offered a 23% reduction in mortality. The authors also found that it was more important to avoid sugar in beverages than it was in solid foods. Similar to minimizing sugar, avoiding high glycemic index foods is also extremely helpful to your longevity. Basically, eat more of the stuff like nuts and vegetables that don't give you an instant dump of energy.

Of all the meats you can eat, fish is one of the best for longevity while red meat and processed meat are among the worst. That's a generalization of course - some fish are much healthier to eat than others (wild salmon is great), and the quality of red meats can vary significantly. The study we chose shows the biggest offender to be processed meat by far, but also shows red meat is slightly harmful on average. So our official recommendation here is to avoid processed meat when you can, and either avoid red meat or be sure it's high quality.

Bad air can come from many sources including polluted cities, factories, forest fires, and high heat cooking. Basically, it's not healthy to burn stuff and then breathe it in. A massive study on U.S. cities found that each 10 µg/m3 decrease in PM2.5, a common measure of air pollution, reduces your mortality by 17%. This amount of reduction or more could be achieved by moving from a polluted city or factory to the suburbs. You can easily find your neighborhood's current PM2.5 measurement online. If you're in one of the world's most polluted cities, your potential benefit could be much higher than 17%! And if you don't plan on moving, you can also use an air purifier in your home and office, and use a car with HEPA filters to help minimize your exposure.

Before modern science began adjusting for confounding factors, researchers used to think that coffee increased death rates. In reality, coffee drinkers were just more likely to also smoke cigarettes. After adjusting for this, recent studies show a non-trivial reduction in mortality for moderate coffee drinking. Furthermore, the improvement appears to remain even if you’re a slow metabolizer of caffeine, which is something you can test for with popular genetic test kits. Note that it's coffee studied here, not caffeine. Decaffeinated coffee has shown similar results.

Remember, caffeine is a drug and is often addictive. It can be beneficial, but can also cause serious effects on your body, particularly at high amounts, so consult your doctor if you're unsure.

#13: Eat 5 servings of fruits and vegetables per day

More servings of fruits and veggies were associated with lower mortality, plateauing around ~5 servings. Notably, this does not include starchy veggies like corn, peas, and potatoes, nor does it include fruit juices. Increasing from 2 to 5 servings per day is what showed the 13% benefit we're highlighting.

Many studies including this meta study show increased mortality if you sleep too little. One difficulty is they had to combine different definitions of "short sleep" ranging from 4 to 7 hours, but the overall result was that staying above ~7 hours reduced mortality. A curious result of their study was that long sleep was even worse than short sleep. Somewhere in the range 7-9 hours looked optimal for most studies, and although the studies were based on survey answers and couldn't measure it, it's common to recommend 7 hours of time actually asleep and not just laying in bed.

Normally we wouldn't include a drug targeting a specific disease in a longevity cheat sheet built for everyone, but Metformin is a notable exception. In studies meant to understand its effectiveness at improving diabetes, the researchers were surprised to find that Metformin reduced death from all causes for diabetics even beyond non-diabetics by 7%. This suggests that non-diabetics could benefit by even more than 7% by taking it. However, Metformin is a prescription drug in the U.S., so we only recommend considering it through talking with your doctor, or other legitimate pathways if you live outside the U.S.

Strangely, no correlation was found between the amount of liquids consumed in a day and mortality. We all know that you'll die within days if you stop drinking water, but perhaps the negative effects only appear with extreme dehydration, whereas all the study participants had full access to water.

Guava can help you track many of the healthy habits in this list. We built Guava to provide the best way to understand and control everything related to your personal health and longevity, all in one place. Guava combines your lab tests, medications, fitness device metrics, lifestyle logs, and more, to make it easy to ensure your health is on track.